Glassmaking has a long history and it is thought that the earliest man-made glass objects were made as far back as 3500 BC. The art of glass blowing is estimated to have been discovered over 2000 years ago, and the ancient Romans started using molds, which took the art of glass making to a whole new level.

The Romans also started using glass in architecture, and glass windows (made from cast panes) made their first appearance in Italian luxury homes in the early imperial period. Soon, glass objects were seen everywhere: as glasses, bottles (love those gorgeous glass alabastra), jewelry, beads, tableware, mosaic tiles, murrine (as seen in the picture here), etc. And the tradition continues – Italians are famous for their glassworks.

They certainly do have a way with glass (a visit to Murano has been on my wish list for a long time), and not just for decorative items. They manage to turn everyday utilitarian objects into pieces of art with just a few extra swooshes or by the way they are shaped:

By Tonelli, based in Talacchio di Colbordolo on the Adriatic coast. They have been in business since the 1980s and have a long list of artist collaborations (Karim Rashid designed two of my favorite pieces, the coffee table Dekon 2 and the bookcase Rollo for them). The Mondovisione was designed by architect and designer Giovanni Tommaso Garattoni, who has created many pieces for them. 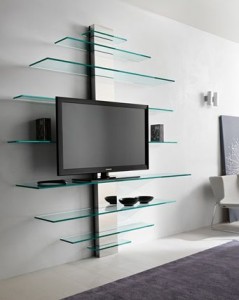 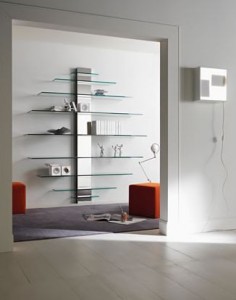 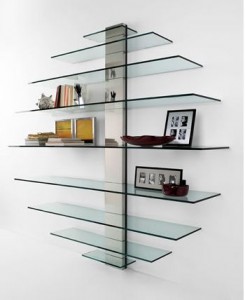 These black glass shelves designed by Studio De-Stil (and sold by Calligaris) are really quite simple in their construction, but that curve makes all the difference. They also come in frosted neutral and transparent glass. 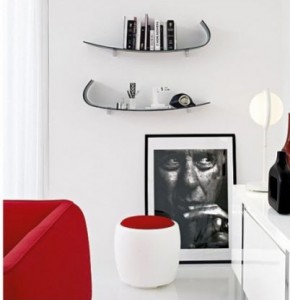 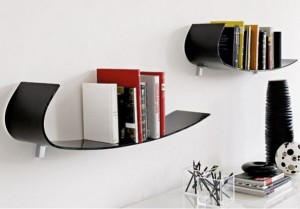 The barely there glass shelves from Cattelan Italia, designed by Toshiyuki Yoshino, almost appear to be floating in mid air. The oval shelves are suspended from a metal rod attached to a cornice-like wooden fixture, and even though it is a really modern piece, it works beautifully in a traditional, more rustic space as well. 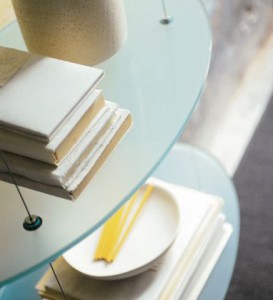 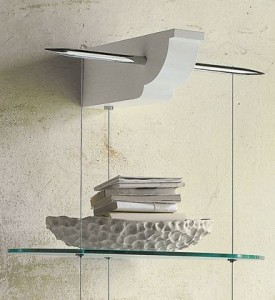 The customizable (in the sense that you can display them in any way you want) “Osaka” shelves from Bontempi Casa were designed by Studio 28 and come in a very pretty clear indigo blue or clear glass, and in a frosted-looking sandblasted pale blue. 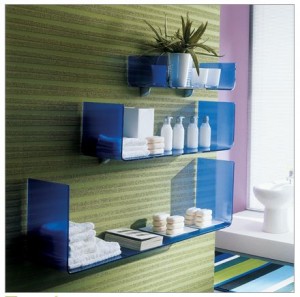 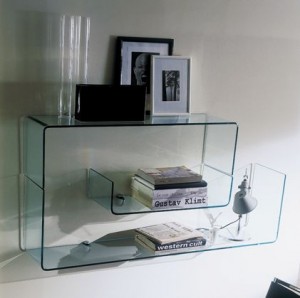 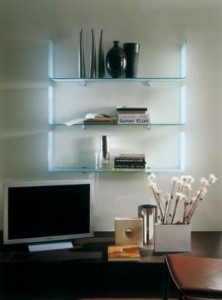 Designed by Luca Casini (who in his Milan studio designs such diverse items as furniture, eyeglasses, toothbrushes, etc.) for Fiam, the Squad glass wall shelves can also be displayed in a few different ways, thanks to the ingenious way they are shaped. As a rectangle, they look like museum display cases (I think), as single shelves as ultra-modern wall decor, and as an open two-box continuum whimsical and creative. 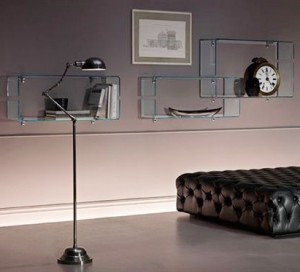 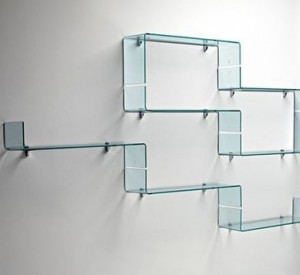 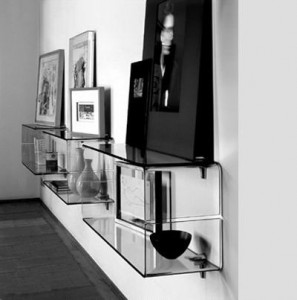 For more shelving, also see my post about wooden shelves from Ferm Living.

We use cookies to ensure that we give you the best experience on our website. By continuing to browse the site, you are agreeing to our use of cookies. OKRead more